I don’t know where I am going, but I am on my way.
― Voltaire

The development of the treatment of sexually transmitted infections (STIs) evolved rather differently in Britain and Continental Europe. In Europe the venereal diseases were seen as a public health problem earlier than in Britain. In fact, as early as 1770, Catherine the Great established the world’s first hospital for the exclusive care of patients suffering from these diseases. Since syphilis was practically the only STI known and given its protean skin manifestations, it was inevitable that dermatologists took over, and departments of dermatovenereology became established.

Venereology in Britain was in a very depressing state until the The Royal Commission Report on Venereal Diseases in 1917 and the foundation of special clinics, which were to be free and confidential and established in all major towns and run by “venereal disease officers”. The new service was greatly influenced by Colonel Harrison of the Army Medical Services, who was appointed as adviser in 1919. Until then dermatologists treated syphilis, surgeons treated gonorrhoea in men and gynaecologists infections in women; a very unsatisfactory arrangement.

In the UK, Genitourinary Medicine (GUM) became established as an independent specialty, and has expanded greatly with dedicated clinics in all major towns and cities run by highly trained specialist doctors and nurses. GU medicine deals not only with the diagnosis and management of STIs but also genital infections and a host of other closely-related conditions, as well as their complications. It necessarily includes the detection and management of people with HIV as well as the safeguarding of children and vulnerable adults, sexual assault, sexual dysfunction, contraception and public health.

In Malta, up to as recently as the late 1990’s, we had the same fragmented service which restricted the British more than 100 years ago, i.e. dermatologists treating the men and gynaecologists the females with never the twain shall meet! Who, (those of my generation anyway), can forget the gregarious, larger than life (in all senses of the word) dermatologist Dr Anton Agius Ferrante (il-Griżu) happily cauterising genital warts in an out-building, well hidden from general view, at St Luke’s hospital?

Belfast 1983. Behind me is a Saracen, an armoured personnel vehicle that served as an ambulance.[/caption]After graduating in 1975, I emigrated to the UK, to escape the then imminent doctors’ strike and all the upheaval which followed. Most of the next 22 years or so I spent in the British Army practising GU Medicine. Apart from a two year stint in bomb-ridden Belfast, most of my time was spent in the much more civilised and congenial Germany serving in the BAOR (British Army of the Rhine). Soldiers, being soldiers, kept one rather busy. 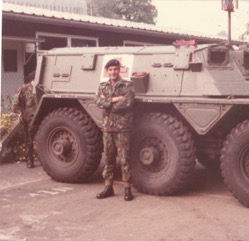 Belfast 1983. Behind me is a Saracen, an armoured personnel vehicle that served as an ambulance. 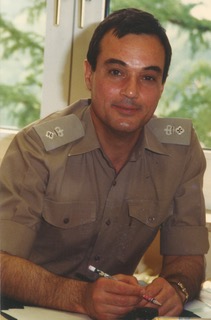 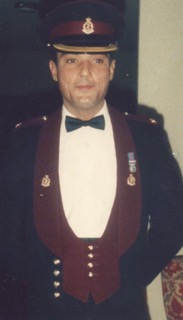 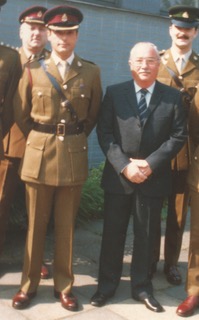 One memorable highlight of my Army career has to be looking after Rudolf Hess, Hitler’s deputy, in the infamous Spandau Prison in West Berlin, during the last 2 years of his life, when he committed suicide (probably) in 1987.

Late 1998 I left the Army wondering what to do next. Back to the NHS (UK) or take up the challenge set by Prof. Joe Pace, then Director of Dermatology, to return to Malta and set up a GU service? Joe’s persuasive skills, as usual, won.

I have to admit that returning to Malta and visiting Sir Paul Boffa Hospital was a huge culture shock. I was transported back to the first VD Clinics, (as they were then called) where I worked in England in the early seventies. Small dark and dingy; so well hidden from view that even staff found it difficult to find them never mind the patients.

My first inclination was to do a rapid about turn. (I actually did go back for three months locum work in Leeds). The problems were many. There was no dedicated sexual health service, Boffa Hospital was totally the wrong place to have a sexual health clinic; no privacy, stigma of the “cancer hospital”; very primitive conditions and not very patient-friendly. Not only were there no discreet facilities for patients, there was no clinic space for the doctor. I was given 48 hours to provide a blueprint for a brand new GU Clinic in the then still being built Mater Dei hospital. I promptly did, but my (very modest) requirements must have got lost in the post as I never received any feedback.

In fact I was forced to spend my first year in the Health Promotion Department while waiting for some clinic space. I resented this initially, but I have to admit that this decision turned out to be inspired albeit totally fortuitous. I was taught to look at Sexual Health from an entirely different perspective, (not just clinical), thanks to the vision and energy of the then director Maria Ellul. We embarked on an intensive sexual health awareness campaign advocating safer sex and condom use. We organised yearly World AIDS Day campaigns and advertised the nascent GU Clinic in the media as well as all the toilets in the Paceville clubs! We set up STIPC (Sexually Transmitted Infections Prevention Committee) with representatives from different specialties to advise the Ministry. 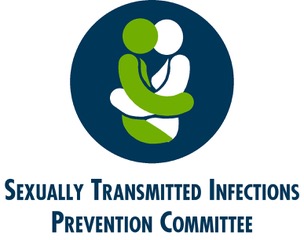 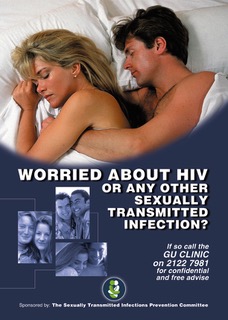 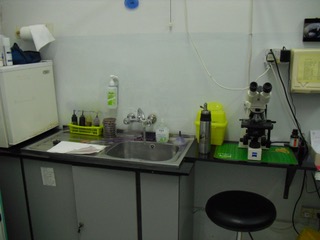 Co-operation from the political masters was desultory and begrudging. Everything had to be fought for. The “facilities” finally provided were primitive at best.

Battles had to be continuously fought with politicians and civil servants, even more so, with some members of the Catholic Church hierarchy who opposed quite viscerally my attempts at promoting awareness and condom use among the public.

Detailed annual reports urging change and the introduction of a wide ranging Sexual Health Policy went unheeded and I suspect unread; (the same indifference was to be the fate of all eventual annual GU Clinic reports).

For the record, 2010 saw the grand launch of a Sexual Health Policy: a high profile, glossy and expensive pr (pun intended!) exercise. It was, and still remains, to a large extent a paper exercise.
Eventually the funds used by STIPC for the awareness campaigns were “diverted” in a cost-cutting exercise. In response to my rather vociferous protests, one particular Minister declared publicly that I was doing it all for my own benefit. I was ordered in no uncertain terms to “zip up”. I did not. 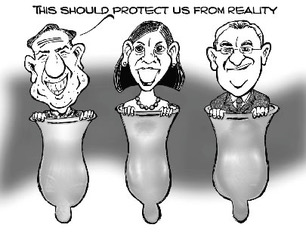 Cartoon In the Malta Today 2008

As I had long before consciously decided not to do private work, specifically to avoid being accused of any self-interest I was rather miffed. I publicly offered my immediate resignation; the Minister invited me for a meeting. I accepted. We kissed. We made up.

The upshot however was that although STIPC was never officially dissolved, it disappeared. I simply gave up convening meetings; no money no clout no point. However, to be fair, some requests were granted. It was eventually agreed to enact legislation to make the notification of syphilis, HIV, chlamydia and gonorrhoea compulsory. This would potentially give us a much better picture of the local STI situation. Nice in theory but unfortunately notification remains largely if not entirely from the GU Clinic.

It was also agreed to allow the clinic to dispense treatment ensuring greater patient confidentiality, in spite of strenuous opposition from the pharmacists’ union. In spite of various hiccups the clinic proved very popular with ever increasing numbers of patients waiting to be seen, reaching over saturation point and causing serious internal conflict. It took this crisis, resulting in a Ministerial inquiry, that finally persuaded the powers that be, to finally do something concrete.

In 2012 a suitable location was identified at Mater Dei Hospital and converted into a modern clinic; (not without another fight with another union of course!) The new clinic was palatial compared to the old one – large, airy examination room, self-contained laboratory, discrete waiting area for patients (with their own toilet facilities no less!), two dedicated nurses, one receptionist…. sheer luxury! 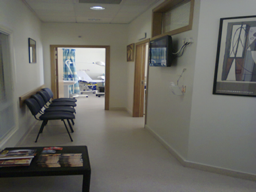 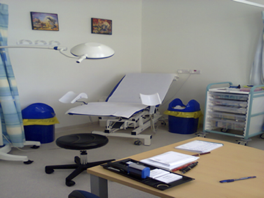 This happy state of affairs continued until 2014 when, at the venerable age of 65 years, my contract came up for further renewal. Unfortunately we could not agree on a suitably worded contract that was mutually acceptable. I never expected a gold watch for my efforts over the years, and I certainly didn’t get one. My resignation was inevitable.

Is all the above a pompous pat on the back? Not at all. Or perhaps the delusions of senility? I hope not!

My intention is to remind all concerned that the GU Clinic’s conception, birth and adolescence have been very traumatic and painful. It should therefore make us want to safeguard it more than ever. It must remain a Genitourinary clinic along British guidelines and should not be diluted and diminished by decisions forced by expediency. There should be no going back to the past.

Since 2014 the Clinic has become even busier with ever increasing numbers of patients, but now at least it enjoys a much larger complement of medical and nursing staff. The energy and enthusiasm shown by the present incumbent Valeska Padovese has helped to sustain the service in no small way. The recent appointment of two specialist trainees who are receiving their training in accredited genitourinary establishments in the UK is a huge step forward. Their responsibility and challenge will be to take the clinic further (much) than I was able…….or allowed to.

Finally some unsolicited advice. The future incumbents need to revisit the raison d’être of the GU Clinic. Sexual Health promotion needs to be given a fresh impetus and old alliances re-established.
Most importantly the Genitourinary service must seek to establish autonomy from all. Genitourinary Medicine is not an off-shoot of Dermatology or Urology or Gynaecology for that matter. It must become recognised as an independent speciality, ready to assume its full responsibilities, prime example being the care of HIV patients; always co-operating with all specialties of course.

No easy task, and there will be strenuous resistance from many quarters, but the battle could be very exciting!

Dare to think for yourself.
― Voltaire