Since the year 2000 Malta has been joining the rest of Europe in the Euro-Melanoma Campaign. Under the direction of the Euro Melanoma Task Force, the campaign is locally coordinated jointly by the Department of Dermatology & Venereology, the Maltese Association of Dermatology & Venereology (MADV), and the Health Promotion & Disease Prevention Department. Dr. Lawrence Scerri, Chairman of the Maltese Department of Dermatology & Venereology, is a founding member of the Euro-Melanoma Task Force ever since its inception meeting in Paris way back in 1999. On Euro-Melanoma Day, typically a designated Monday in April or May, a melanoma-screening clinic, undertaken by all the dermatologists & trainees in the department, is conducted at Boffa Hospital. Data collated from this clinic is forwarded to the Euro-Melanoma Task Force for data analysis. Every year, as part of this campaign, health promotion & educational information and messages are disseminated to the public by means of a press conference, media interventions, and display of health promotion material with the theme chosen by the Euro-Melanoma Task Force yearly in clinic/hospital waiting rooms, pharmacies and on public billboards throughout Malta & Gozo. The campaign is funded by local & international pharmaceutical sponsors, whose logos are displayed on the artwork.

Given that melanoma, which is strongly linked to UV exposure, is by far the commonest skin-related cause of death worldwide, and its incidence has been progressively rising in recent decades, the two main objectives of the Euro-melanoma awareness campaign are to promote: 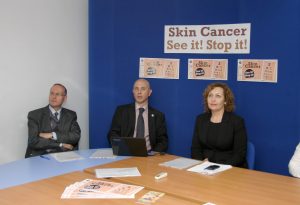